I don’t like many photographs of me, but I do li

Ready for the rush that never comes

I made Gary Rhodes’ lemon tart tonight. Made it

What posh actors have when they’re nervous about

Last night with Steve and Debbie at Los Sibileys.

‪On the last leg of an 800 mile user research tr

In a very stylish but Sunday-quiet Aberdeen bar th

When running for a train was just so much fun!

Bradford’s Waterstones has to be the most fabulo

Load More...
This error message is only visible to WordPress admins

A child’s Christmas in Bradford

It’s 1974. Last year the telly was off now and then, as were the lights, and sometimes, because Yorkshire Television engineers were striking, we could only tune into a very snow-stormed signal from Tyne Tees.

A year later, the UK was still in a bad way but on December 9th I was wishing away the remaining fortnight to my 8th birthday and accepting the inevitable trailing maelstrom of social unpleasantness I’d learned to call Christmas. The tree had shifted the telly a couple of feet to the left below the living room window and from its tinsel-bare, twisted sixties silver wire branches hung the most glorious array of gold, green, red and purple glass baubles that lived in the cardboard cross-sectioned box on top of the wardrobe for 11/12ths of the year. They were the seven year old’s equivalent of the finest works of Boucheron, Asprey, Faberge and Harry Winston suspended by silvered tendrils fresh from the workshops of Paul Storr and Paul de Lamerie. For me, right then, nothing, but nothing evoked luxury and indulgence more powerfully than those cheap glass ornaments. 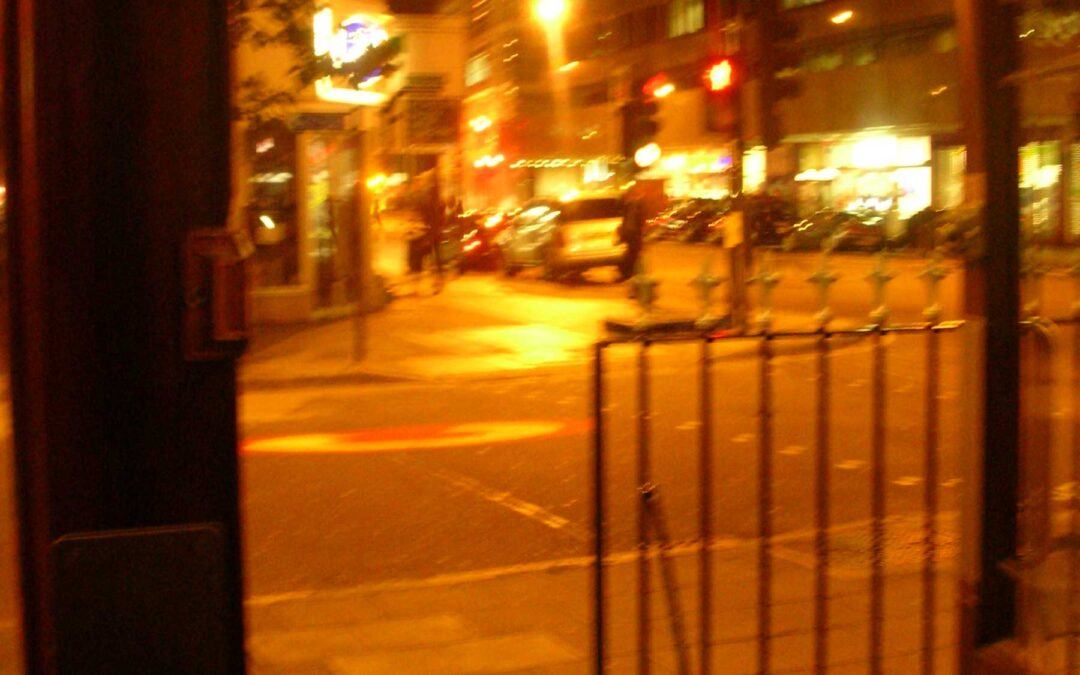 Last night, I was standing outside The Northumberland Arms, on the corner of Tottenham Court Road and Grafton Way. As usual, I had a pint and the Evening Standard cryptic crossword on the go. Combine these simple pleasures with the circus-parade of individuality that passes by as you consider ‘six down’ and it makes for a pleasant way to pass an hour. Particularly if you’re on your own. It also makes you a sitting duck for those improvising a mendicantry existence in the streets of W1.

It’s not unusual to be approached for money in the West End and I’ve tried several responses during the 25 years or so I’ve been in London regularly. Initially, I didn’t have much money myself so ‘no’ should have been the stock response to “Can you spare some change?” But I’m not like that, or at least I wasn’t like that. If I have the means to help, no matter how meagre, I’m compelled to do so. If I walk away, I often feel guilty, or at least concerned that I haven’t done my best.

I then matured into a discretionary phase during which I evaluated each request based on my perception of its merits. The criteria included, but weren’t limited to, politeness, location, whether the person was sitting or standing – I never gave money to anyone who wasn’t standing – and curiously, the state of the person’s shoes. Clean and or newish footwear consistently led me to hang onto the pound coin I always had in my right hand ready for such encounters.

I became bored with, as they say in the trade, ‘the cognitive load’ generated by this process. As the century turned, I was living in London with my wife and newborn daughter and doing OK, so I adopted a ‘give a quid to everyone’ stance. Wasn’t too expensive and meant there were no decisions to make. Happy time.

More recently, with business not so good, I’ve become meaner, rarely giving anything to anyone. I don’t like it, but needs must.

Anyhow, last night I was charged at by a stubble-brushed, greasy-skinned man. Uneasy on his feet, he grasped The Northumberland’s cast iron railings with both hands and, with determined stare and white-knuckled tenacity, spat out ‘I. Small-English. Few words. Alchohol’iche. Need drink.’ Taken aback by his honesty and directness, and the fact that he obviously really did need a drink, I made a swift mental estimate of the minimum amount of money he needed to buy a drink from the off licence next door – the pub wasn’t going to serve him -and the likely impact of such generosity on his overall health. The headline ‘Do-Gooder Kills Wino’ much on my mind, the wheels stopped whirring at £1.50.

I fished out the money, handed it over the railings to him. He turned and shuffled to the off licence, returning seconds later with a can of Strongbow. Ripping off the ring-pull, he reached over and clinked my glass, took a half can swing and gasped ‘Thank you. Thank you!’. Slightly refreshed, he then grasped my right wrist in his left hand and held my nervously clenched fist to his chest, just above where his pickled heart probably was, and repeated ‘Friend’. A vague attempt to explain his predicament involving the words ‘Big men, cut, better’ with much pointing at University College Hospital, was followed by a final swig and he headed off across Tottenham Court Road towards Gower Street.

This all happened so fast – a stream of consciousness – that there was no time for decisions, or analysis. It was just a series of events and exchanges that occurred at the speed of life. Did I do the right thing? I certainly helped another human being achieve a brief moment of, well I was going to say happiness, but ‘comfort’ is probably more accurate – and it’s not often someone asks for money on the street and you get to see exactly what they spend it on.

But should I have just said no?